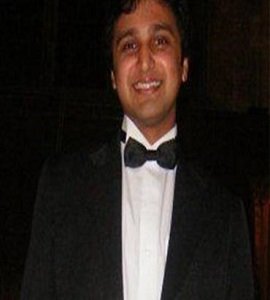 
Mr. Sankalp Kochar graduated from NLIU in 2007. He hails from Jabalpur, where he now practices with his team of 8-9 Advocates. His clients include Corporate Houses, Media Houses, Administrative Class -I Officers and Bureaucrats.

He began working in the Chambers of Mr. Alok Aradhe, now a sitting Judge at the High Court of Karnataka. He also worked at the coveted position of Law Intern to Hon'ble Chief Justice of the Supreme Court of India, Mr. Y.K Sabharwal

He qualified for the esteemed Gregory Scholarship and went to one of the world's most prestigious universities, Oxford, to do his LL.M.

In College, he was always amongst the top 3 performers of his batch. He brought lot of laurels to the college at the National as well as the International level. He won the Best Speaker award in the Jessup National Rounds, went for the Stetson National Rounds, was semi-finalist at ISIL, and won the M.S Ramaiah Moot Court Competition as Best Speaker. He also won the Best Diplomat award at the Harvard MUN 2005 organised at Edinburgh, UK.

He held key positions of responsibility, being the Convenor of Moot Court Association and the Director for Centre for Research in International Law during his college days.