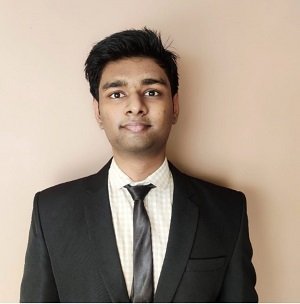 Adarsh V is one of the candidates who in all sense is a “truly deserving” student for the scholarship. Born and brought up in Kerala, he overcame mammoth challenges to be at this juncture today. His father was forced to take a voluntary retirement in the year 2007 as his mother was diagnosed with life-threatening ailment. Since then his father has been toiling as a farmer in other people’s lands as he does not own any property of his own; while his mother is an unskilled labour

Adarsh is a stellar student since school and had fee concessions because of his merit. He finished school with a shining 95% on his record and wanted to pursue law. The annual family income is around Rs. 1,92,000 of which only Rs. 1.1 Lakh is available to them owing to shares being given to relatives from the income, putting him in a juxtaposition of being in an NLU.

Even after facing all these adversities he cleared CLAT in 2018 and was admitted to NUALS, Kochi. His first fee instalment was paid by taking a loan from his father’s Pension Fund which was the last savings the family had. For further instalments they had to avail of an education loan for an amount of 6 lakhs. The family is not in a position to support him, as his younger brother also needs funds for studies soon finishing class 12th.

Adarsh is an exemplary student with a GPA of 8.77/10 and cent percent attendance record throughout his semesters. The most heart-breaking moment for him was in 2019 when he had to let go of an opportunity to participate in a National Moot Court Competition only because he did not have the money to travel to the place even after being one of the highest scorers in the Intra Batch Freshers Moot Court Competition. This is a case of deprivation of bare minimum resources to enhance his legal education. Since then he has been doing regular paid internships and they’re hard to come by as we all know, thus limiting his growth scope even further. His Annual Fees for Academic Session 2020-21 is Rs. 1.63 Lacs.

It is often perceived by the community that if your goal is high the journey would be tough and painful. Adarsh, on the other hand, believes that if you enjoy your journey then only the goal is worth the hardship. His ardent admiration for the Law keeps him determined and dedicated. To make his expedition smooth so that he isn’t detracted from his summit, CAN is proud to announce Adarsh as an Eklavya Scholar under the ‘Extreme Hardship’ category as not only he satisfies its criteria but also justifies the word ‘Scholar’.