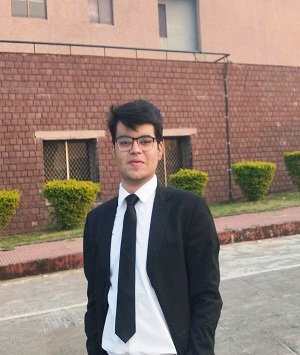 Anshumaan is one of the most serious and diligent candidates that have applied for the Foundation’s scholarship. After the sudden demise of his father in 2017, he was completely reliant on his mother, even when it had an awful toll on her and she worked tirelessly for the sustenance of both of them. The net total income of his mother is in between Rs. 40,000 - 80,000/- Per Annum for the past two years.

Anshumaan is a meritorious student with a stellar CGPA of 7.33/8 and has a glowing letter of recommendation from the Vice Chancellor of his university. Along with that he has participated and won laurels in many number of Debates and Moot Court Competitions. He has been adjudged as the State Winner of the 27th National Youth Parliament Competition 2015. Besides, he worked as Research Assistants to many luminaries like Prof. Sridhar Acharyulu (Former CIC), Prof. AK Agrawal (IIM, Ahmedabad) and Prof. Rajeev Gowda (MP, Rajya Sabha).

In his letter, he highlights how he wishes to serve the society and help the people in need like him. According to him, this is the sole reason that prevents him from taking an Education Loan as he would be forced into a “debt trap” and thus would be forced to take a Corporate Job with a fixed income on the higher end. He proclaims that the Eklavya Scholarship that was awarded to him in 2019, really eased his burden and he is extremely grateful for the same. Due to the COVID-19 Pandemic both his mother’s and his relative’s income has reduced significantly. Thus, he is facing severe hardship to procure money to pay the College Fees for the session 2020-2021.

Anshumaan has been shortlisted by the Foundation for the Eklavya Scholarship as his aspirations and his concerted efforts to realise them in face of hardships have made a compelling case for his candidature. We believe that investing in his education would be a step towards helping a dynamic young student foray into the profession. Therefore, he has been adjudged as an Eklavya Scholar under the ‘Extreme Hardship’category.