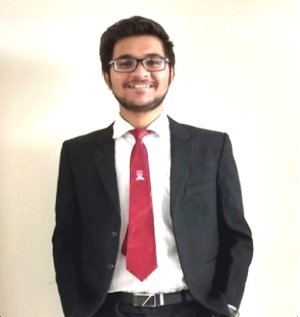 Attendance Record: Aggregate Attendance for the 3rd and4th Semester is96% and 94.60%(Approx.)

ENTITLEMENT FOR SCHOLARSHIP AS CASE OF “Hardship” (S.No.17)

Manav Sharma was a recipient of the inaugural edition of the Eklavya Scholarship, where he was awarded Rs, 1,00,000.

The father of the candidate is Junior Workshop Executive of an automobile company, is the sole earning member of the family with income only Rs. 12,000 approx., per month(gross salary of 2 Lacs) and is a heart patient, with clots in the brain. The mother is a home-maker and battles debilitating migraine issues. The majority of this amount is spent on medical needs and bills. The candidate’s brother is a recent graduate whose fees had depleted the family’s resources, and he himself has loans to pay off. With no ancestral property, gold ornaments of the mother were sold, and the father secured a loan of Rs. 1,00,000 which drastically reduced the monthly pay to Rs. 7,500 per month, to pay fees in the first year. Further he received a one-time scholarship from the Rajasthan Government, worth Rs. 72,000 which has not been announced this year because of COVID. Problems have been further heightened by the reduction in Salary down to 35% of total amount, because of prevalent conditions. For the Second Year, fees were paid with the help of a student loan, and money borrowed from relatives, who charged high interest rates and the Eklavya Scholarship for the previous year. The fees that are to be paid increases by 10% every year, which in itself is a problem.

The candidate has further expressed inability to secure internships, and other professional development courses, which are essential to the evolution of a lawyer, citing a severe lack of resources. They now have to pay back the student loan as also money borrowed from relatives within four years as well. He further mentions that people like him are forced to take jobs that must necessarily have high-paying entry level salaries, because of the crushing debt that they must take upon themselves in order to pursue the privilege of education.

He is the inaugural recipient of Eklavya Scholarship and has been shortlisted again in recognition of his continued efforts to better himself and to allow him to focus on his study. His family is currently facing hardships to make ends meet and to be able to pay for his education. Thus, CAN Foundation is proud to include him as an Eklavya Scholar under the ‘Hardship Category’.