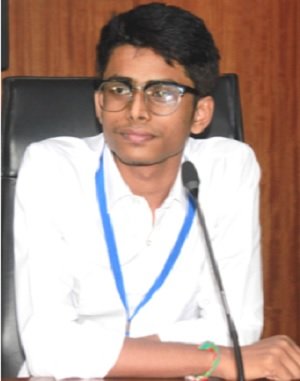 Attendance Record: Aggregate Attendance for the 2ndand 3rdSemester is 92.5% and 97.9% (Approx.)

ENTITLEMENT FOR SCHOLARSHIP AS CASE OF “Hardship” (S.No.3)

Pradhumna hails from a remote village of Uttar Pradesh near the Madhya Pradesh Border and has had very humble beginnings with his father being a farmer in the village who barely even had enough to feed the three people in his small nuclear family. The family of three only has 4 acres of irrigable land to their name from which this income arises.

Seeing him struggling with basic studies his uncle who serves as a constable in Indore, brought him to the city and has been taking care of his studies ever since. After class 12th Pradhumna decided to take up CLAT and prepare for the exam, clearing it without any external help or coaching aid. He was however in for a rude shock when he realised the annual fee of the NLU he was selected to was more than 4 times his annual family income (a bare Rs. 42, 000 per annum). His uncle was also forced to reconsider things as he also has his own three children to support for studies as they’re getting out of school and soon will be needing funds.

Pradhumna has been a bright student throughout his Law school with straight Os (highest grades possible) in all his Law Subjects taught through the years. He also has multiple publications to his name upon platforms like Taxmann, Corporate Professional Today, Kith & Kin Attorneys etc. He was also able, in his second year itself, to secure a slot among the top 8teams at the National Moot Court Competition on Insolvency & Bankruptcy Law as jointly Organised by National Law University, Delhi & the Insolvency & bankruptcy Board.

He was forced to work without a laptop or a phone in his first and only in his second year was he able to manage an old donated laptop that helps him get by. His financial constraints have not allowed him to participate in any large - scale moots and he has never been able to apply for internships in larger metros owing to the high payments and costs involved in such cities.

He greatly values his academic performance and has thus managed to stellar grades. He has participated in various co-curricular activities like national Moot Court Competitions and achieved laurels. But he faced a lot of financial challenges and was even forced to manage without a laptop in his 1st year. So, to reduce these barriers in his study, CAN awards him with the scholarship under the ‘Hardship Category’ to help him secure a better future.