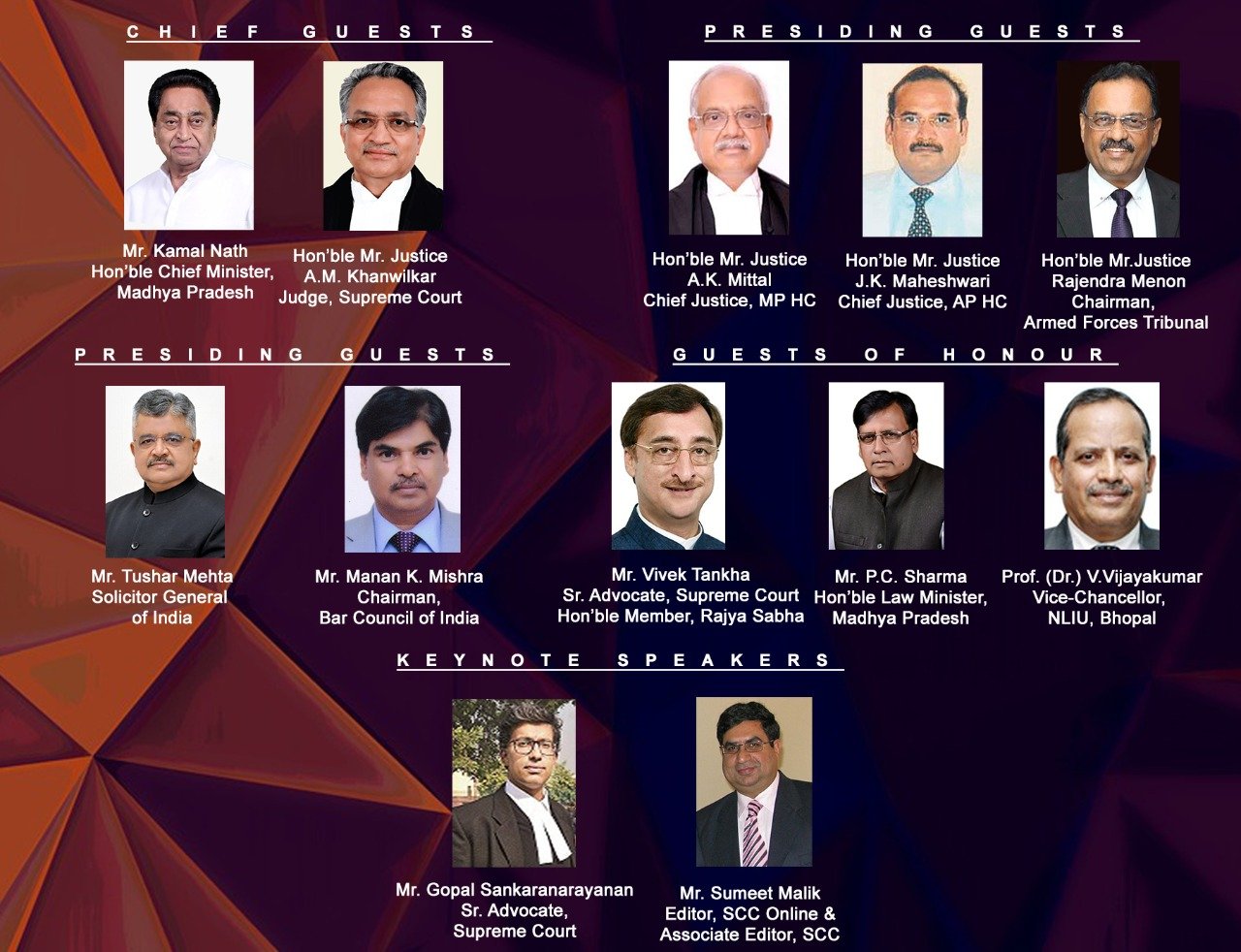 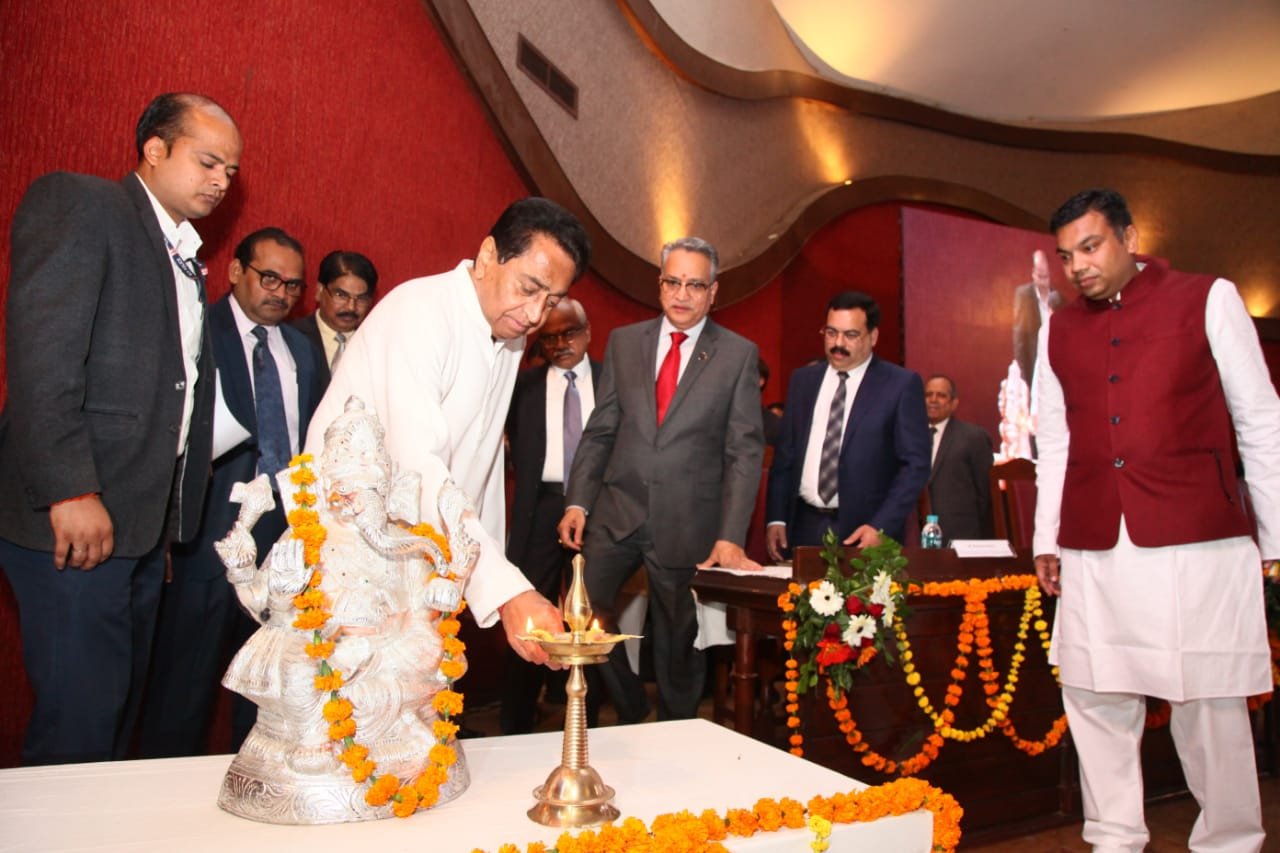 Ganesha Stuti & Deep Prajawallan by the Chief Guest of the Inaugural 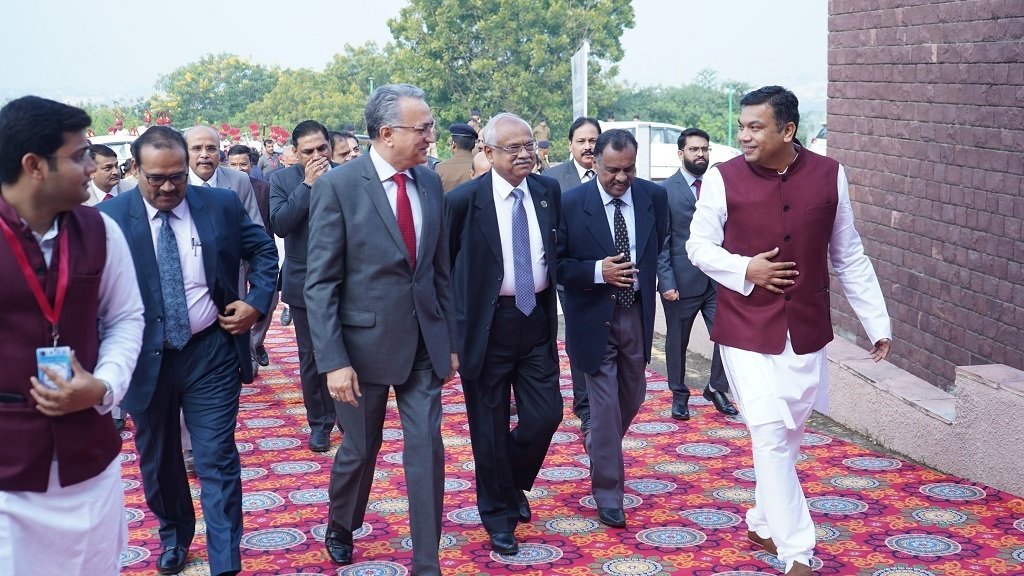 Arrival of HMJ Khanwilkar and other Judicial Officers at the venue of Event in Morning greeted by CEO, CAN Mr. Siddharth R Gupta & Secretary, Mr Manu Maheshwari.

Growing concern that NLUs are not accessible, Justice Khanwilkar at CAN Foundation launch 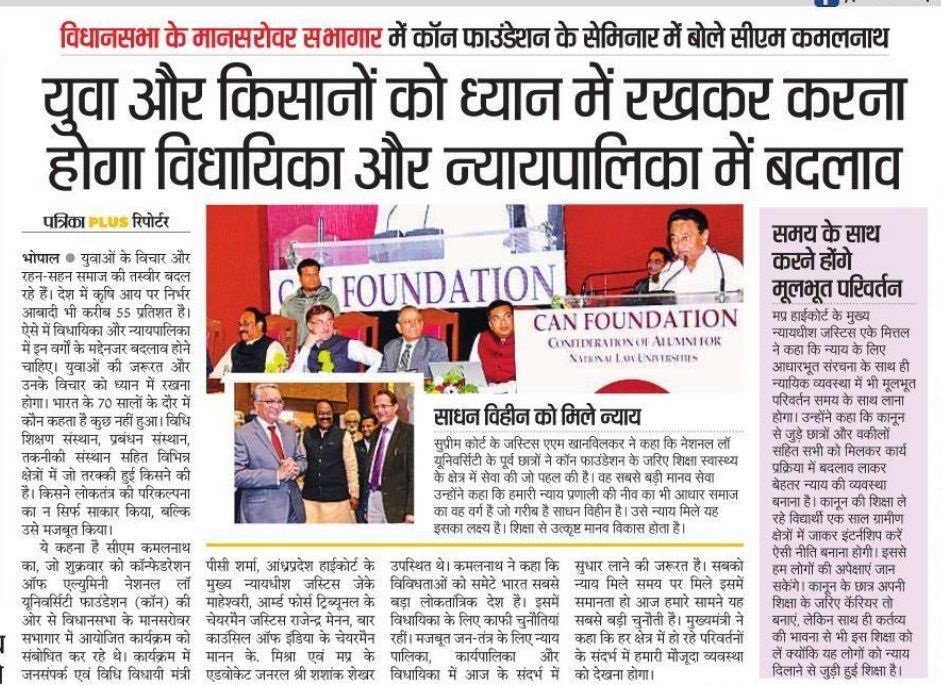 Epilogue to the Inaugural Ceremony & Symposium of CAN Foundation

The Inaugural Ceremony & Symposium of the Foundation was organised in collaboration with 3 eminent entities of their respective arenas. State Legal Services Authority (SALSA), which is the pro-bono legal services arm of the High Court of Madhya Pradesh; Bar Council of India (BCI) and National Law Institute University (NLIU), Bhopal. The collaboration was arrived at with the active indulgence and interest taken by the various eminent entities and distinguished members of legal fraternity associated with the conceptualisation of CAN Foundation.

The Inaugural Ceremony and Symposium of CAN Foundation was held in the august presence of Chief Guests of Dais - Hon’ble Chief Minister Madhya Pradesh, Shri Kamal Nath and Hon’ble Mr. Justice A. M Khanwilkar. The dias was also graced by the Hon’ble Chief Justices of the Madhya Pradesh and Andhra Pradesh High Court, HMJ A.K Mittal and HMJ J.K Maheshwari along with other distinguished guests including the Chairman of the Armed Forces Tribunal HMJ Rajendra Menon and RS- MP &Senior Advocate Mr. Vivek Tankha.

After a melodious and patriotic welcome by the Army Band of 33 Army Staff Members (who came all the way from Nasik Cantonment Base of Indian Army), the day began with the CEO, Mr. Siddharth R. Gupta tracing the origins of CAN and providing to the guests in attendance, the background of the EklavyaScholarship. His speech became one of the highlights of day replete with Sanskrit shlokas and extracts from hindi poems.. After this, began a series of enlightening speeches by the members of the dais, after which our Patron Mr. Tankha was honored by the Respected CM for his charitable work.

Mr. Justice Khanwilkar, lauding the efforts of CAN Foundation, said in so many words:
“This Foundation comes at a time, when there is a growing concern that National Law Universities are not accessible to students from all sections of society.”
He went on to address the trend of NLU graduates not joining litigation.

"A solution has to be worked out to reduce the burden on the students, either by the government or through organisations like CAN.”

Senior Advocate and President of the Bar Council of India, the apex body governing lawyers and legal education, Mr. Manan K. Mishra made an announcement of great importance in his speech. (He was also one of the legal luminaries on the dais) He said that a National Lawyers Training Institute was in the works to train law graduates from the non-NLUs. Plans for the first such institute in Madhya Pradesh were being discussed. Mr. Mishra also announced that looking to the sincere approach of CAN towards its flasghip Projects like Eklavya& Dhananjay, he was motivated to give a commitment that all future national level seminars and symposiums of CAN shall take place in collaboration with Bar Council of India as its official collaborator of the events.

The Second Session of the daylong event was a Symposium on “Strengthening the Role of NLUs in the Justice Delivery System” was graced also by one of the Guests of Dais - Hon’ble Mr. Justice J.K Maheshwari gave a detailed account of the history and thought process behind the idea of an NLU and the vision of Late Prof. Dr. N.R Madhava Menon, before we saw two graduates of the oldest NLU of the Country- Mr. Sumeet Malik, Class of ‘99 (Editor SCC Online) and Senior Advocate Gopal Sankaranarayanan, Class of ‘01, who greeted his Constitutional Law Professor, Prof. Dr. V. Vijayakumar (Currently Vice Chancellor, NLIU) and also paid tribute to his visionary senior and Intellectual Property expert Late Prof. Dr.Shamnad Basheer before moving on to talk about teaching law students' values. Teamwork, pride in one’s work, and balance between work and life. His speech was followed by a question and answer session, in which he and Mr. Malik entertained questions from judges, lawyers, academics and students in attendance.

The Third Session saw remarks from Hon’ble Mr. Justice Menon, Hon’ble Mr. Justice Pathak and Prof. Dr. Vijayakumar. The President of the Foundation, Mr. Abhinandan Mishra gave the Vote of Thanks, expressing gratitude to the Vidhan Sabha and its Principal Secretary with staff for their support, the Foundation Members and Volunteers for their hard work, while stressing on the importance of continuing forward with the singular aim of helping others.

The fruitful day was drawn to a close with an elegant dinner hosted by the Foundation with a musical night, as a way of expressing heartfelt gratitude to the members of the Bar and Bench for taking out time and attending the Inaugural Ceremony.
Edited by :
Mr. Ishaan Chauhan
4TH Year, NLIU,Bhopal